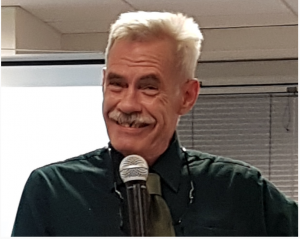 In March, Indonesia’s presence as Market Focus Country at the London Book Fair 2019 (LBF-2019) marked an especially important moment in the country’s effort to promote Indonesian literature and culture abroad. The road to this position was a long one. John H. McGlynn, a member of the National Organising Committee for Indonesia as Market Focus Country and the coordinator of Indonesia’s cultural and professional programmes at LBF-2019, gave a talk about this journey.

John has a long history of promoting Indonesian literature abroad. He is the director of publications at the Lontar Foundation, an organisation he established in 1987 for the purpose of introducing Indonesia to the world through literary translations. He is also a member of Indonesia’s National Book Committee, where he oversees the Committee’s Translation-Funding and Writers’-Residencies Programmes. He was in charge of Indonesia’s literary programme at the 2015 Frankfurt Book Fair when Indonesia was the Country Guest of Honour and he is now working with the British Council, the London Book Fair, and the UK Publishers’ Association to develop a long list of cultural and professional events that was held in conjunction with LBF-2019.

In his talk, John described his work at Lontar and the journey that led to Indonesia’s selection as Market Focus Country and will give a preview of Indonesia’s programme of events at LBF-2019.