Skip to content
ONLINE via Zoom (Zoom link will be provided) 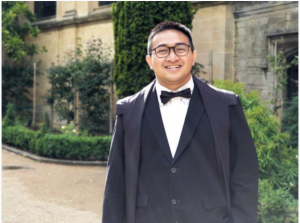 Indra Rudiansyah is a DPhil student at the Jenner Institute, Nuffield Department of Clinical Medicine, University of Oxford.
After finishing his undergraduate (2013) studies from the Bandung Institute of Technology in Indonesia (ITB), Indra completed his master’s degree in biotechnology through a fast-track program at the same University in 2014. He then joined Bio Farma, an Indonesian state-owned vaccine enterprise in Indonesia, for 4 years as a researcher before starting his DPhil.
During his professional career, he has been involved in the process development of rotavirus and novel oral polio vaccine in collaboration with BMGF and PATH. Now his research focuses on the development of the pre-erythrocytic malaria vaccine, using chimpanzee adenovirus as a viral vector. During COVID19 Pandemic, Indra joined the clinical trial team to evaluate the ChAdOX1-nCOV19, a candidate vaccine for COVID19 that has been developed at the University of Oxford.
Indra will be talking about his personal experiences as a student in Indonesia and now as a DPhil (PhD) student at Oxford University.

Dear Members, Welcome back to the Anglo-Indonesian Society’s autumn programme of events. I hope you are all keeping well and have managed to get some kind of break over the summer, despite the END_OF_DOCUMENT_TOKEN_TO_BE_REPLACED

ONLINE via Zoom.  For zoom link, click here. Passcode: 138839 Sinta Tantra is a British artist of Balinese descent. Her work has been described as "exuberant", a "hedonistic celebration of END_OF_DOCUMENT_TOKEN_TO_BE_REPLACED

ONLINE via Zoom (Zoom link will be provided) Indra Rudiansyah is a DPhil student at the Jenner Institute, Nuffield Department of Clinical Medicine, University of Oxford. After finishing his END_OF_DOCUMENT_TOKEN_TO_BE_REPLACED

The Indonesian Embassy in London is currently conducting a survey on the profile and expectations of potential Indonesian language learners in the UK and Republic of Ireland. Fill in the survey END_OF_DOCUMENT_TOKEN_TO_BE_REPLACED

Maluku Province is one of the poorest, least developed and least educated provinces in Indonesia. Many Moluccan students can’t get access to good English training, and therefore scholarship END_OF_DOCUMENT_TOKEN_TO_BE_REPLACED