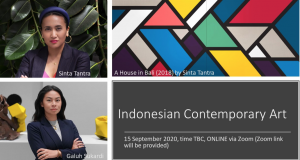 Sinta Tantra is a British artist of Balinese descent. Her work has been described as “exuberant”, a “hedonistic celebration of excess and decoration”, and her contribution to public art by transforming spaces with “chaotic yet captivating images” has been recognised by collectors and commissioners alike. Her work Universe of Objects in Archive, Arsenic and Railings are praised for lifting the perspective “like the energy of a released spring and pulses horizontally around the room in endless optical trigonometric fugue”. In this event, Sinta will share her views on her arts and Indonesian arts.