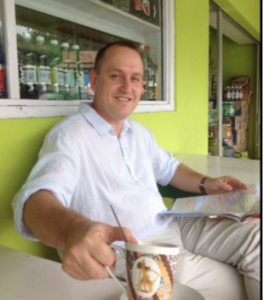 Ian Rowland, who was an advisor to the Central Java provincial government between 2003 – 2019 as part of the Danish government’s Environmental Support Programme, will give a talk on the environmental management in Central Java.

With its rapid rate of population and economic growth, Indonesia is facing a range of environmental challenges, including waste management, pollution of water and air from uncontrolled industry emissions, inadequate planning that does not protect the environmental in the planning stage, widespread loss of natural habitats, and an uncoordinated response to rising energy needs that is doing little to reduce the reliance on polluting fossil fuels.

Much of the responsibility for addressing these environmental challenges lies with regional governments at the provincial, district and village levels, where capacity and levels of commitment are highly variable across the country.
Between 2013 and 2019 Ian Rowland was an adviser to the provincial government of Central Java, as part of the Danish government’s support to the Indonesian environmental sector. In this presentation, he will talk about some of the projects implemented during that time, including the complete electrification of the Karimunjawa Islands with solar energy; efforts to help villagers in Wonogiri avoid using mercury in their gold-mining activities; and the country’s first commercial scale refuse-derived fuel facility, in Cilacap, where all of the domestic garbage collected by the city council is processed for use as fuel in a cement factory, to replace coal

It promises to be a fascinating presentation.   You will all be aware of concerns over Coronavirus. The UK government’s current advice on COVID-19 does not suggest curtailing events such as ours and END_OF_DOCUMENT_TOKEN_TO_BE_REPLACED

The Indonesian Embassy 30 Great Peter Street Westminster London SW1P 2BU Ian Rowland, who was an advisor to the Central Java provincial government between 2003 - 2019 as part of the Danish END_OF_DOCUMENT_TOKEN_TO_BE_REPLACED