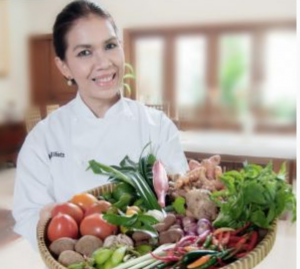 In conjunction with the Orchid Festival at the Royal Botanic Garden, Kew, renowned author and chef Petty Elliott introduced the food and culture from Indonesia with a cooking demonstration, and to discover more about nutmeg, cloves and chilies, also how regional Indonesian food became a vital influence on world cuisine.

Petty demonstrated how to make the spice paste for a roasted pumpkin soup, infused with ginger, chilies and lemongrass and topped with crunchy tempe, which you’ll have a chance to taste.

This event was free for public who purchase ticket to see the Orchid Festival at Prince of Wales Conservatory.