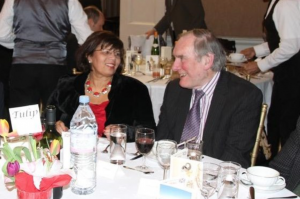 One of John’s early initiatives was to organise the Society’s Indonesian Earthquake Disaster Fund in 1976, when members donated over £2,200 (via the Indonesian Embassy) to the International Red Cross in Jakarta, to support the victims of the quake.

In December 1975, John signed off a payment to the Portman Hotel in London for the Anglo-Indonesian Society’s Annual dinner – a buffet for 214 guests at £3.95 a head.

John and Farida kindly hosted a lunch for Indonesian students in the Cambridge area in May 2013.

John remained on Council until the AGM in November 2014. We believe that John has been the most longstanding Council member with 41 or 42 years of continuous service to the Society, even longer than Baroness Vickers (1956 – 1994) and Christopher Scarlett (1976-2013).

In recognition of John’s remarkable service to the Society, the Council has made a donation in his memory to the Motor Neurone Disease Association