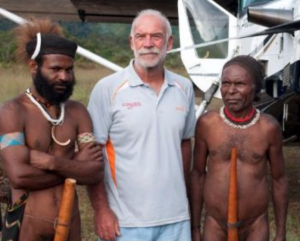 John Carlile is a geologist from Jersey in the Channel Islands who has spent the last 40 years or so exploring for gold in the Australasia-Pacific Region. Gold tends to occur in remote out of the way places and working in this environment has provided exposure to some spectacular terrain and many isolated communities of which the Moni are one.

In this session, John Carlile will talk about the Moni Way. The Moni are a Melanesian Tribe of around 50,000 people made up of 75 clans who live in the remote highlands of Papua. They are the third largest tribe in the highlands after the Dani (250-300,000) and the Me (200-250,000) and their traditional lands straddle the rugged Sudirman dividing mountain range.

The first contact between the Moni and the outside world is thought to have been in the 1920’s which also marked the first introduction of metal. The Moni Way aims to describe the physical environment, customs, traditional way of life and the life cycle of the Moni. Started in 2003 and now after 16 years, The Moni Way is still a “work in progress”.

The Indonesian Embassy 30 Great Peter Street Westminster London SW1P 2BU Ian Rowland, who was an advisor to the Central Java provincial government between 2003 - 2019 as part of the Danish END_OF_DOCUMENT_TOKEN_TO_BE_REPLACED

The British Museum is organising a guided tour for the Raffles' collections on:   11 December 2019, 13.15–14.00 Gallery tour with the curator Alexandra Green, Gallery 91, free 8 January END_OF_DOCUMENT_TOKEN_TO_BE_REPLACED