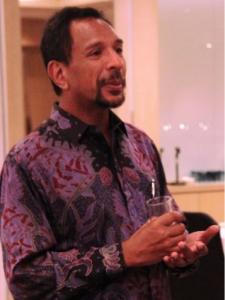 Maluku Province is one of the poorest, least developed and least educated provinces in Indonesia. Bahasa Basudara is a free on-line language course designed specifically to help Moluccans to improve their English, German and Dutch language skills. Within a year there are now over 130 tutors and over 160 classes each week. This model of using diaspora to help students in Indonesia can be duplicated by other areas and for different subjects.

Jeff Malaihollo will give a talk about Bahasa Basudara and its progress and future plans. Jeff spent his formative and teenage years in Jakarta. He moved in early 1980s to California to study geology at UCSB (University of California, Santa Barbara). In the late eighties, he married his British born wife and followed her to the UK where he continued studying and obtained his PhD at UCL (University College London) – where he researched the Geology and Tectonics of the Bacan Area, south of Ternate and southwest of Halmahera.

Professor Michael Hitchcock will moderate the session. He has been conducting research on Indonesia since the late 1970s. He has written and edited 14 books, including the bestseller ‘Indonesian Textiles’. Over the years he has given a variety of talks to AIS, most recently presentations on Macau and the Malay world and eruption of Tambora. He has worked in museums, notably the Horniman Museum, and universities including Goldsmiths, Macau University of Science and Technology, London Metropolitan University and the University of Hull.

an introduction of our future workshop coming to you soon… What is a brand? Is your logo a brand? How important is a brand for your business? If you want to know more about this topic, then come END_OF_DOCUMENT_TOKEN_TO_BE_REPLACED

Thursday, 8 April. 12 PM - 1:45 PM (ONLINE via Zoom) Link & Change and Rasaku are organising a discussion event about tempeh. Two of the speakers (Sri Owen and Petty Elliott) are A-IS END_OF_DOCUMENT_TOKEN_TO_BE_REPLACED

A-IS council member, Lesley Pullen, has just published her new book. Below is a short abstract of the book.There survive a number of free-standing figurative sculptures produced in Java from the END_OF_DOCUMENT_TOKEN_TO_BE_REPLACED

Good Vibration has just released their latest album, Sharing Good Vibration. The album is a compilation of some of the best music from their projects in prisons, secure hospitals and the END_OF_DOCUMENT_TOKEN_TO_BE_REPLACED