“Remember, my beloved granddaughter,” Sri Owen’s grandmother cautioned her one morning in 1942. “When you grow up, don’t marry a foreigner.” 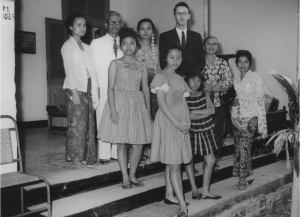 Owen was seven years old, and her grandmother was referring to someone from an island other than their native one in West Sumatra. But she didn’t listen: Owen would end up marrying a shy, handsome man from the United Kingdom, Roger Owen, twenty years later. She would follow him from Yogyakarta to London, where she found herself far from the vibrancy and comfort of her grandmother’s cooking. Owen became fixated on the possibility of recreating it in the kitchen of her new flat”.